How to Put a Creative Touch on Colonial Style House Remodel

Colonial style homes have influences as diverse as America’s first settlers. These houses have common attributes that are still popular today, even as homeowners add creative touches to the traditional style. You may be looking for ways to enhance your colonial style home and work on a colonial style house remodel.

Robert Catalfomo, of Premier Building and Renovation (their work is shown above), said homeowners still appreciate the formal elements and aesthetic of Colonial homes, but more often than not, they’re adding features of other styles and using non-traditional colors to make their homes unique. At Premier Building and Renovation, they notice a lot of families diving into colonial style house remodel.

“People like to express themselves, and with the products available today, the style can easily lend itself to being more creative,” Catalfomo said.

What Is American Colonial Architecture? 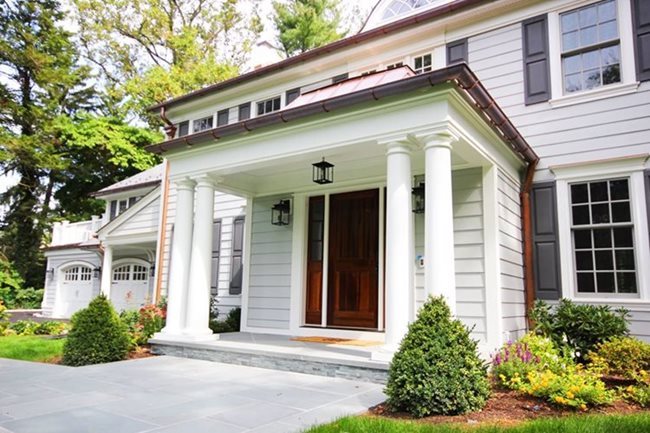 American settlers in the 1700s sought to replicate the styles that defined architecture in their native countries, creating a variety of sub styles, including French Colonial, Spanish Colonial, Dutch Colonial, German Colonial, and others. Among the most popular is the Georgian style house, which is influenced both by ancient Greek and Roman architecture and the Italian Renaissance.

What Are the Characteristics of a Colonial Style House?

Moulding: Decorative elements, such as crown moulding over the top of the windows, dentil moulding along the roof lines, and decorative bottom window sills are common in Colonial houses.

Pedimented and Gable Dormers: Pedimented dormers extend away from the roof and are supported from the ground by columns, posts or pillars, whereas gable dormers are built completely into the roof gable (the area between the gutters and the peak of the roof).

Columns and Chimneys: Some Colonial style homes have pillars surrounding the front doorway and either a central chimney or one on each side of the house. 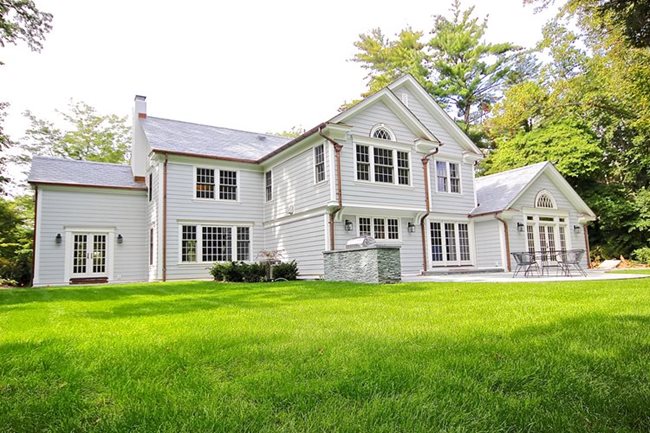 The Colonial house presents a variety of opportunities when it comes to siding materials and colors. Traditionally, Catalfomo said, Colonial homes were sided with white clapboard and featured a red front door. Now, his firm only uses white siding on a small percentage of the homes they renovate. Homeowners are playing with color, from blues to grays to tans, but one traditional element remains: the vast majority of Colonial homes have white trim.

Catalfomo says he’s seen many Colonial homes sided with brick, lap siding, or shingle siding. Sometimes, homeowners will choose to combine different materials. For example, they might use HardieShingle® siding on the front and HardiePlank® lap siding on the sides and back of the house.

Some homeowners are even going further by fusing the Colonial look with other architectural styles. Catalfomo said he’s seen wood and metal accents and copper accent roofs increase in popularity. The modern farmhouse trend sometimes emerges in the details with some homeowners adding texture by using board-and-batten siding in the roof gables.

When looking to do a colonial style house remodel, it is important to think about which exterior siding you should choose when remodeling your colonial home. Homeowners should take into consideration the history of the home, and choose siding that will link to the past, as well as create a more modern look to the home.

When it comes to choosing siding for a colonial style home, Premier Building and Renovation install James Hardie siding.

The Appeal of the Colonial Style Home

While the Colonial house may seem overly formal to some people, modern updates to this traditional style can appeal to homeowners with a variety of tastes. Plus, the functional interior layout makes this style an ideal choice for families.

“Part of the American dream is owning that type of home … the one with the white picket fence,” Catalfomo said. “It’s a familiar style of home to many people. It’s the type of home that you can raise a family in.”